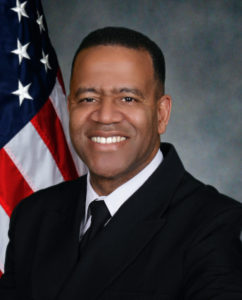 National Review’s columnist David French describes Kelvin Cochran’s story as “a firefighter’s version of Ben Carson’s Gifted Hands.”  Born into abject poverty with an alcoholic father that abandoned their family, he was raised, along with his five siblings, by a single mother who made sure they were in church.    Sometimes they ran out of food and ate mayonnaise sandwiches, but according to French, “Cochran was raised in a community that was both faithful and patriotic…the adults in the (church) congregation gave him a clear message: His dreams could become true if he had faith in God, got a good education, respected his elders, and treated others the way they liked to be treated.”
As a five-year-old boy in Shreveport, Louisiana, Kelvin was spellbound by firefighters fighting a fire across the street from his house and dreamed that one day he would be one.  French says, “Interestingly, although the Shreveport Fire Department was all white, not a single adult told him that he couldn’t fulfill his dream.  Instead they repeated their mantra; faith, education, respect, and the Golden Rule.” His employment with the Shreveport Fire Department began in 1981 as a firefighter.  He studied and worked hard.  He was then promoted to Fire Training Officer in only four years, something that normally takes 12 years to achieve.  He gained promotion to Assistant Chief Training Officer after ten years of service, something that normally takes 20 years to achieve.  After only 18 years of service he was appointed Fire Chief of the Shreveport Fire Department in 1999.  During those years as Chief he was selected as First Vice President of the International Association of Fire Chiefs and became President of the Metropolitan Association of Fire Chiefs.  Eight years later, he was recruited to be the Fire Chief of the City of Atlanta.  On August 17, 2009 he was appointed as the United States Fire Administrator, the top fire position in the United States, by President Barack Obama.

By this time the Atlanta Fire Department was suffering in his absence, according to French, “with budget cuts leading to a shrunken, demoralized force.”  Cochran was recruited to come back to Atlanta in 2010 to again be the Fire Chief of the City of Atlanta, and turn the department around.  French says, “He moved back to Atlanta, eager to take on the challenge….He got results.  Atlanta-for the first time-became a ‘Class 1’ city, the highest fire-protection rating, given to only 60 cities in the United States of 40,010 reviewed.  Firefighter and civilian deaths and injuries decreased on his watch.  He accomplished these results all while focusing on “justice, equity, and compassion.” “

Kelvin is an ordained minister.  He currently serves on staff at the Elizabeth Baptist Church of Atlanta as Chief Operating Officer and Chief Strategic Officer, is married to Carolyn Marshall Cochran and is the father of three children and has one granddaughter.

Much of the information in this biography was obtained from David French’s article about Kelvin Cochran published in National Review, February 29, 2016.