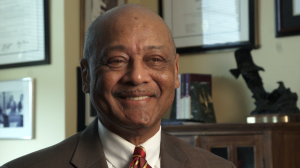 Founder and President of the Woodson Center,
Social Commentator & Author

Robert L. Woodson is the founder and president of the Woodson Center, and an influential leader on issues of poverty alleviation and empowering disadvantaged communities to become agents of their own uplift. He is a frequent advisor to local, state and federal government officials as well as business and philanthropic organizations.

Woodson is regularly featured as a social commentator in print and on-air media. He has published in influential newspapers and journals such as The Wall Street Journal, Forbes, The Hill, National Review, The Washington Post, The New York Post, Milwaukee Journal Sentinel, Harvard Journal of Law & Public Policy, Vanderbilt Law Review, The Los Angeles Times, The Philadelphia Inquirer, and other national and local media outlets.

He is the recipient of the prestigious John D. and Catherine T. MacArthur “Genius” Fellowship award, the Lynde and Harry Bradley Foundation Prize, the Presidential Citizens Medal, the 2018 William Wilberforce Award and most recently has been honored by President Trump at the White House for Black History Month. https://www.youtube.com/watch?v=-NlrGn_2OrE

Woodson is the author of several books, including On the Road to Economic Freedom and The Triumphs of Joseph: How Today’s Community Healers are Reviving Our Streets and Neighborhood.