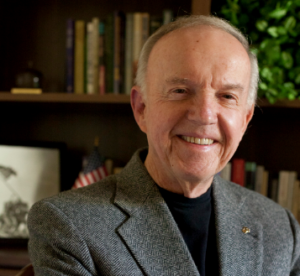 Walt Wilson is founder and chairman of Global Media Outreach (GMO), reaching more than a million people every day with the Gospel of Jesus Christ, in multiple languages from every nation on earth. With over 45 years experience as an operating executive in Silicon Valley, Wilson has served in a variety of management positions with three Fortune 50 companies starting with Fairchild Semiconductor as a regional sales manager.

He then joined a small start up, Apple Computer, as General Manager of Operations and a member of the management team that led the company into the Macintosh era. He finished his business career with Computer Sciences Corporation, a $16 billion, U.S. global corporation with 600 offices worldwide, employing over 100,000 people. Walt was a senior vice president and officer of the Technology Consulting Group managing the business in Pacific Rim countries, based in Tokyo. Prior to his business career, Wilson served four years active duty with the United States Marine Corps.

He is the author of The Internet Church, published by Thomas Nelson/Word.