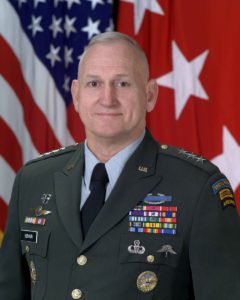 Lt. General “Jerry” Boykin, US Army (Ret) currently serves as the Executive Vice President of the Family Research Council in Washing- ton, DC. Previously, LTG Boykin served at the Pentagon as Deputy Undersecretary of Defense forIntelligence, overseeing the gathering and exploitation of intelligence during the wars in Afghanistan and Iraq. In his thirty-six years in the Army, he served for more than 24 years in Joint Special Operations, with a command at every level. He was one of the original members of the US Army’s Delta Force and was privileged to ultimately command these elite warriors in combat operations. He participated in clandestine operations around the world, beginning with Desert One, the failed 1979 mission to rescue American hostages held in Iran after the Islamic revolution that toppled the shah. He participated in the invasions of Grenada and Panama in 1983 and 1989 respectively, accepted the surrender of Manuel Noriega and headed the chase to capture Colombian drug czar Pablo Escobar in 1992. In 1993, he clashed with Muslim warlord Osman Atto in Somalia, chronicled in the film Black Hawk Down. LTG Boykin ultimately served as the Commander of the US Army Special Forces Command and as the Commandant of the John F. Kennedy Special Warfare Center and School at Fort Bragg, North Carolina.