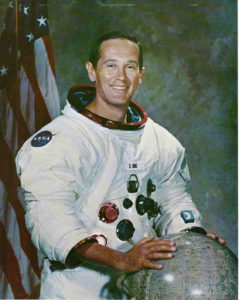 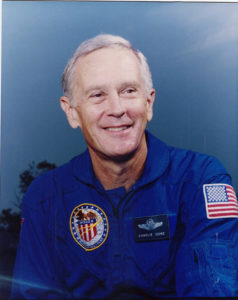 Brigadier General USAF (Ret) & Apollo 16 Crew Member,
the 10th of Only 12 Men to Walk on the Moon

“As an American, it was my honor to serve my country by going to the moon aboard Apollo 16 and becoming the 10th man to walk on the lunar surface. We can all share in the accomplishments of the Apollo program, just as we shared that special moment when on July 20, 1969, we watched the televised pictures of the Commander of Apollo 11, Neil Armstrong, as he took his “…giant leap for mankind.” ON THE MOON *” In 1972, Apollo 16 astronaut, Charlie Duke, became the tenth man to walk on the moon. Duke, along with astronaut John Young, performed the Apollo mission with an enthusiasm and humor that entranced their vast TV audience. He has been delighting audiences ever since. Gifted with the combined abilities of storytelling and challenging others, Duke is in demand worldwide as a keynote and motivational speaker. Here is a man who has set goals and attained them. Duke is motivated, dedicated, and honorable. He is a man who not only entertains, but encourages and inspires others to reach their goals and beyond. Charlie Duke was born in Charlotte, NC, in 1935. Led by a desire to serve his country, Duke attended the U.S. Naval Academy in Annapolis, Maryland. Following graduation, he was commissioned into the U.S. Air Force, and thus began a life-long love of flying. Over the years as fighter pilot, test pilot, and then encouraged by his commandant Chuck Yeager to become an Apollo astronaut, this love of adventure grew to the pinnacle of achievement when on April 20, 1972, he, along with John Young, landed on the surface of the moon. Their stay on the moon was a record-setting 71 hours and 14 minutes. Duke and Young spent more than 20 hours exploring the moon. This involved emplacement and activation of scientific equipment and experiments, the collection of nearly 213 pounds of rock and soil samples, and the evaluation and use of Rover-2 (their lunar car) over the roughest and blockiest surface yet encountered on the moon. Charlie Duke filmed the only pictures made of the rover in action – it’s record setting speed was 17 kilometers per hour. During Apollo’s three day return from the moon, Duke experienced a space walk with the third crew member, Ken Mattingly. The view over one shoulder was filled with a brilliant full moon and over the other hung a crescent earth – a thin sliver of blue and white. “Fantastic!” Charlie would exclaim again and again. Apollo 16 returned to a hero’s welcome, with Duke, Young and Mattingly each receiving the NASA Distinguished Service Medal. Since Duke’s retirement from NASA in 1975, he has been very active in business. He formed and was president of Orbit Corporation (a beverage company distributorship). He has been an active partner in real estate shopping center development and was president and investor of several companies. Duke also served in the Air Force Reserves as special assistant to the Commander of USAF Recruiting Service, meeting all goals in recruitment of engineers and doctors. He traveled extensively speaking at schools and universities as part of Project Warrior. He was appointed by the National Aeronautics and Space Administration to the NASA Advisory Council. He is presently owner of Charlie Duke Enterprises (which has produced two space videos) and is president of Duke Investments. General Duke is the past Chairman of the Astronaut Scholarship Foundation in Titusville, FL.